Why I Flow: Rachel Thompson

Rachel’s kind eyes and big smile beam back at me from across the internet. The genuine warmth in her greeting breaks through from the other side of the screen; a virtual hug that stretches magically from London, all the way to my office in Australia.

Reverentially dubbed ‘The Lioness’ by fellow Flowists, Rachel Thompson has been a key presence–and inspiration–in the AF community almost since it began. When I was first introduced to Animal Flow in 2014, I dreamed of being able to move with Rachel’s seemingly effortless grace and control. I still do. It’s not hard to see why.

From dancer to dance teacher

Having begun her dance career at the age of 3, Rachel spent her childhood and adolescence dancing. Until the age of 18, when she went to university to study for a degree in dance, Rachel spent up to 5 days a week learning a range of styles.

“I wanted to go to gymnastics but my mum took me to tap class,” says Rachel. “I was really disappointed. I wanted to do forward rolls but mum put me in tap shoes. I hated it. Then I went to a different class where we were doing cartwheels across the floor and I just fell in love with it.”

Her love affair with dancing deepened as she got older. “I wasn’t out on the streets kissing boys, I was in dance class. There was no drinking on the street corner like other teens. I didn’t want my dancing to be taken away from me. Instead, it was competitions, shows, pantomimes, costumes and jazz hands.”

Despite Rachel’s passion, she “wasn’t amazing,” with industry figures telling her that her body wasn’t designed, structurally speaking, for dance. Their words did little to dampen her spirit. “Even back then, I was like, ‘Fuck it. I’m going to be a dancer. You’re telling me I’m not, but I am.’”

After university, Rachel moved to London to begin her dance career in earnest. She won a few contracts–one in a studio, another teaching dance in schools–and was on track towards her goals.

Until that is, she endured a period of undiagnosed back pain in 2004 which brought her dance career to a halt. “They tested me for everything. I’m not really sure what it was but I realized I wouldn’t be able to continue to dance. That was it,” Rachel says, matter-of-factly.

Rachel soon made the transition from dancer to personal trainer, attaining her qualifications under the guidance of educator and UK Master Instructor, Rich Scrivener.

You can see the truth written all over Rachel’s face as she extols the virtues of her unplanned career diversion. “I actually love it,” she beams. “Doing it for a living is what started it but then I found my passion for helping people.”

In 2014, Rachel decided to attend an Animal Flow certification workshop in the UK, which Rich was promoting. Alongside Rich, Rachel was joined by an enthusiastic group of budding Flowists, including soon-to-be Animal Flow friends, Edita Tarvydaite and Caroline Taylor.

“Apart from Rich saying it was wicked and me trying to do Underswitches on my floor at home, I didn’t really know what I was about to experience.”

Whatever it was, it set Rach on a new trajectory. Fast forward to today and Rachel has attended countless Animal Flow workshops and events. “I got certified in Level 1 and then booked onto the Level 2 course the same year. Since then, I’ve taken the Level 2 workshop about a million times,” she laughs. “You can always learn more.” 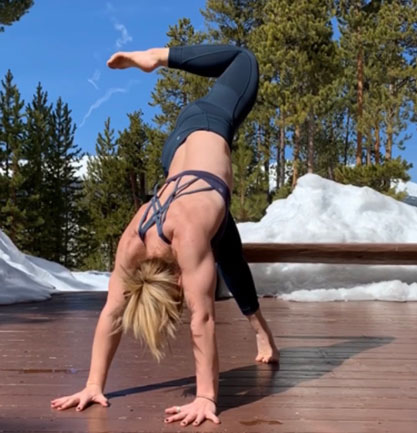 Rachel performs a Scorpion Reach in Colorado at an Animal Flow retreat.

While ‘a million’ may be a slight exaggeration of the number of workshops Rachel has attended, there’s no doubt that it’s a lot. Rach has taken Level 2 four times, [the now superceded] Advanced Flow Design twice, as well as attending one retreat in Miami, two in Colorado, and one Animal Flow mentorship in Bali. She’s also set to attend the November 2022 mentorship in Greece.

That’s a lot of hours and a lot of air miles for someone who originally signed up out of curiosity and a need for professional development points.

So, what was it that hooked her?

“I always explain it like this: you’re suddenly spending time on yourself. Anyone who does AF knows that when you’re practising you can’t think about anything else. You need to know where you are in space, and what you’re doing; I don’t think I’d been connected to myself for a long time.”

Rachel believes that connection to self played a role in the realization that she no longer wanted to be in her relationship of 12 years.

“I remember that my [then] husband dropped me off at the airport to go to the retreat in Miami. I cried when I got out of the car; I kind of knew that was it. When I was in Miami, I said to the girls, ‘If I could change anything, I wouldn’t have gotten married.’ I couldn’t believe that those words came out of my mouth. That was in February and by April I was out, I’d left.”

Rach’s Animal Flow practice became a solace for her in a time of immense grief and upheaval. She’d share her practice with the community in the Animal Flow Certified Instructors private group on Facebook, using it as a chance to alchemize her pain.

“Mike [Fitch, Animal Flow Creator] and everyone must have been thinking, ‘Oh god, here she goes again, another one of her sad song Flows coming on again.’ I just used to Flow and Flow and Flow. It was the thing that helped; it was just like meditation. It helped to get all of that shitty feeling out.”

Car crashes and back surgeries

While manageable over the years prior, Rachel’s experience with back pain was not yet behind her. In 2017, Rach was driving in the fast lane on the M1 from Leeds to London when her car was hit from behind by another driver, forcing her into the car in front.

The accident caused a flare-up of Rach’s back pain, and while her physiotherapist helped get it under control, a continued high-intensity, high-volume training schedule overpowered their best efforts.

“I should have stopped but I wanted to do all the things,” she says wryly. “Animal Flow, training, competitions in strength training, [team fitness competition] Turf Games. I enjoyed it, but doing all of it was too much.

“One day, I got pain down one leg, which was a red flag. It got worse and worse to the point that I woke up one morning and couldn’t move my legs.”

Rachel received a diagnosis of impending Cauda Equina Syndrome. “Basically my disc had come out, there was a huge bulge, and I had no space in my spinal canal at the bottom. It was crushing the region of nerves that control my legs, bowel, bladder, sexual function.”

Within two weeks, Rachel was in surgery, having the disc bulge repaired and then began physio to rehabilitate her body. But the pain returned. One nerve root was being crushed and Rachel was in agony.

With the help of back specialist, Joel ​​Proskewitz, Rach found a new surgeon who formulated a detailed treatment plan that got Rach back on her feet. “One day, just like that,” she says, snapping her fingers, “It just started to get better.”

The road to rehabilitation

These days, Rach’s focus is on showing respect to her body by allowing it to do what it can.

“All through the phase of not being able to move, there would be some days where I could be on my hands and knees. Eventually, there was a day when I was allowed to do one push-up. I got on the floor and I enjoyed that one push-up so much.

“Then it was ‘let’s try Beast, let’s try Crab,’ and it was fine. If I did something one day, I’d give myself a big break before doing it again. And so I’ve just moved really slowly.”

While some moves may still be a way off in the distance for Rachel, she has relished her return to movement, and her beloved Animal Flow community.

“The thing about everyone in the Animal Flow community and how kind they are is that when you’re not feeling well, they send you things, like this painting on the wall,” Rachel stands and angles her camera to a painting of a lion, sent to her by Regional Leader Nikki Rubino from Sydney, Australia.

“Or they just check-in and see how you are. Victor [Reyes, Regional Leader from New York] and Caroline would send me video messages asking how I was. I was still part of the community, and people were really kind in the way of not pushing the movement side of it.

“The UK instructors sent me a jigsaw puzzle, a photo montage of us all doing Animal Flow. How nice is that?! I am honestly so grateful.”

Why The Lioness Flows

In spite of the time Rachel was forced to take off from her practice there was no part of her that ever considered not making a return.

“I didn’t go through all of that over the past two years to just give up. I feel like I wouldn’t be honoring myself if I didn’t try. Last year I couldn’t even walk but I’ve been given the opportunity to move again. I feel like I’ve got a new body. There’s no way I’m going to just stop.”

Rachel’s professional dance career may be over but her Animal Flow journey is far from finished.

“When I Flow, I feel like I’m dancing–for no one, for everybody and myself. It’s freedom and it’s friends. It brings connection with yourself, with people across the world. It brings kindness,” she says, the realization appears to dawn on her as she speaks. “Yeah, Animal Flow brings kindness.”

Find Certified Instructors, like Rachel, in your area or online via the Animal Flow Instructor Directory. With instructors in over 40 countries, you can find both group classes and one-on-one training all over the world!