The Benefits of Animal Locomotion

Develop your brain and body through crawling patterns

Anyone can crawl, right? After all, you just get down on your hands and knees and scoot around a bit. Crawl from one place to another and all of a sudden, you’re practising animal locomotion.

Anthony Guerds, Partner and Head Coach of Strength at Primal Performance Lab in Ho Chi Minh City, Vietnam discovered this to be true at a recent Animal Flow L1 instructor certification workshop. Anthony began exploring some of the movements after being introduced to them in 2019 but his journey to certification was delayed due to the pandemic.

After taking the workshop, Anthony’s understanding of, and appreciation for, locomotion and quadrupedal movement has deepened substantially.

“There’s such a HUGE difference from casually thinking I was doing AF to doing it with precision, awareness, and full-body tension,” Anthony said. “I love the idea of now ‘plugging the energy leaks’ in the movements that I was previously unaware of.”

So, what is animal locomotion?

Animal locomotion involves traversing the ground using animalistic movement patterns. This doesn’t mean roaring like a tiger or performing some sort of prancercise-inspired horse gallop (though we won’t judge you if that’s what you’re interested in).

Instead, it’s taking inspiration from the varied gait patterns and movement mechanics that are on display in the animal world, and applying them to benefit your own human animal.

If you’re looking to get started with animal locomotion, your first move should be crawling. 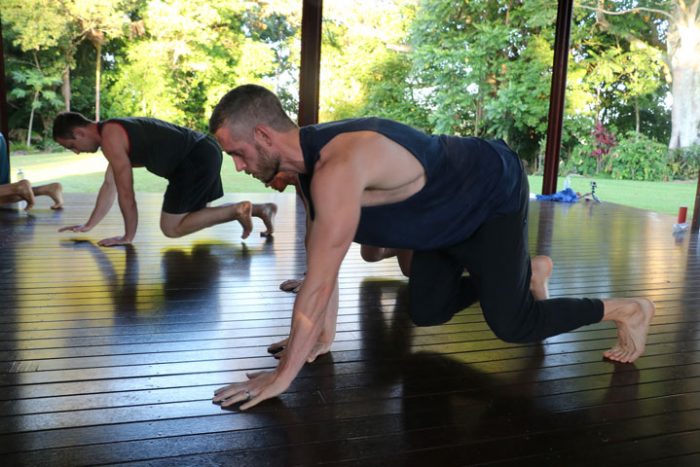 Crawling: the shared locomotion of mammals

The first year of life as a human involves some of the most important development we ever experience, much of which arises from our interactions with our environment. In the nine to 14 months that it typically takes us to learn to walk, our hands, knees and feet become our major source of physical connection to our landscape.

As we learn to crawl, our movements share characteristics with non-human primates as well as other quadrupedal mammals. Like primates, babies tend to crawl using a diagonal gait pattern, with opposite limbs landing in sequence, and by touching down with protracted limbs.

It’s believed that two distinctly non-primate characteristics (the sequencing of our footfall and maintaining fairly stiff elbows during the stance phase) are borrowed from other mammals to increase our stability and reduce effort at our joints. These features have led scientists to the conclusion that, when it comes to locomotion, our underlying neural circuitry is likely to be similar to that of other quadrupedal mammals.

It stands to reason that, as babies, we experience the process of locomotion through crawling phases that replicate reptile and mammal crawling styles. These phases are incredibly important for developing our brain’s coordination circuitry, while simultaneously recruiting multiple muscles together in pathways that will form the foundation for our ability to walk upright.

What’s the difference between child and adult crawling?

To most of us, children’s and adult crawling styles may not appear to be all that different from one another. However, adults tend to possess notably more flexibility in the way they crawl, with the ability to successfully change crawling strategy from using same-side (ipsilateral) limbs to opposing (contralateral) limbs. These differences are largely believed to occur as a result of the more mature nervous system that adults have.

While adult brains may have more options available when it comes to how we crawl, infants still appear to use an innate problem-solving ability to negotiate various types of terrain. If you’ve ever seen a baby navigate the challenge of crawling downstairs by turning around to do so backwards, you’ll have seen this in action.

What are the benefits of crawling?

Far from just being an inferior form of motion when compared to walking or running, crawling is vitally important to all growing brains and bodies. 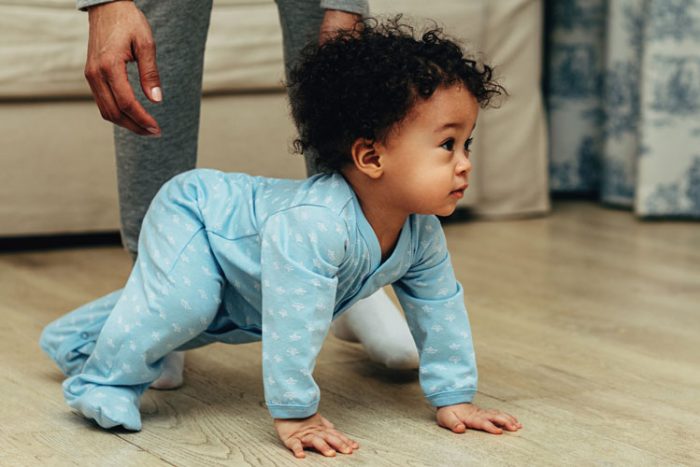 Crawling forms an important part of the stages of development for babies.

In addition to those mentioned above, adults can also expect to see a range of other benefits from animal locomotion in general.
These include:

Add all of that to the fact that you don’t need much space or any equipment to do it and it’s easy to see why it’s become such a popular style of physical activity.

A strong foundation for achieving goals

For Anthony Guerds, animal locomotion has definitely proven itself a worthy staple in his own training and that of his clients.

“I have found that adding Animal Flow into my training regimen has completely opened up an entirely new discipline of human movement for me,” said Anthony.

“It has helped me gain self-awareness and become more intentional in my body. I always felt like there was something I was missing to tie everything together to reach my goals. Now I’m inspired to expand on the journey of animal locomotion and elevate many of the other skills I train for by using this as a part of the process.”

Watch the video below as Jin Takazawa, Animal Flow Master Instructor from Japan, demonstrates a series of animal locomotion drills, known as Traveling Forms. You can find full-length tutorials on each of the movements at Animal Flow On Demand.

You can find full-length tutorials on each of the Traveling Forms that Jin is demonstrating by visiting the Tutorials: Level 1 Movements at Animal Flow On Demand. Get your 14-day free trial now!