How movement efficiency, mobility and connection can make you a better surfer

When Simon Gfeller suffered a herniated disc in his lower back, he hit a crisis point. Without being able to practice Parkour, one of his two lifelong passions, he found himself looking for ways to “just move.”

He stumbled upon the solution almost by accident. After seeing an advertisement on social media, he joined an Animal Flow workshop, not realizing at the time that it would be the entry point to becoming a Certified Instructor.

“When I started practicing, a whole new world opened up in terms of understanding my body,” says Simon. “It’s so attached to science and it finally gave me the words to explain what I had been experiencing for years in Parkour. This really motivated me to just spend a lot of time on Animal Flow.”

With his back injury putting an end to his time as a traceur (a Parkour practitioner), Simon was able to double down on his other passion, surfing. He’s animated when he discusses his love for it: “Surfing is above Parkour, Animal Flow, everything,” he beams. 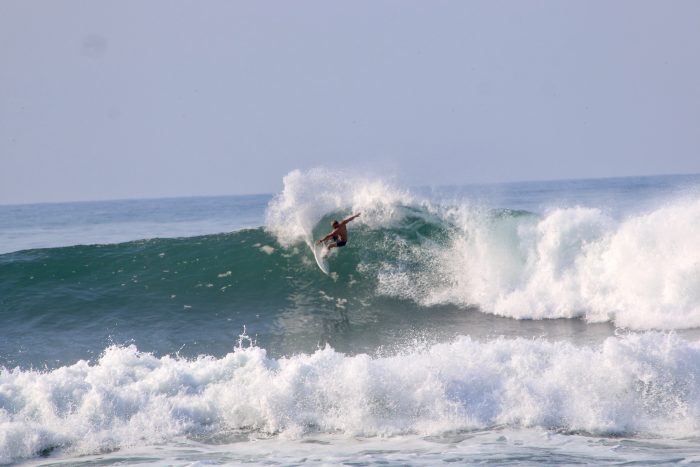 Animal Flow Certified Instructor, Simon Gfeller, finds the bodyweight practice to be a vital part of his surf training.

Since learning to surf in Australia at the age of 20, the 40-year-old Swiss native has been fascinated with the regenerative and energizing power of the sport.

“It’s the perfect example of being in flow,” he explains. “As soon as I’m in the water, I lose time, I become one with myself and nature. I’m alert, all my senses fire up.”

Learning to engage those senses even further is exactly what Simon sees as the number one benefit of Animal Flow to his surfing.

“For me, it’s proprioception. Where am I in space? Where are my limbs? You need to know where to place yourself on your board. Everything in surfing, for me, comes down to proprioception. If you want to be able to adjust things when you’re surfing, to really be able to change something, you need to be able to get back into your body and realize, ‘Ok, where am I? My arm is flapping back here, I need to get it to here instead.’”

“I can strengthen my body with any type of fitness, I can do push-ups, I can go running. But Animal Flow has this part of it that is about moving through space, and through all planes of motion. This is what makes Animal Flow so special and what makes it, for me, personally, more powerful than yoga as a training tool for surfers.” 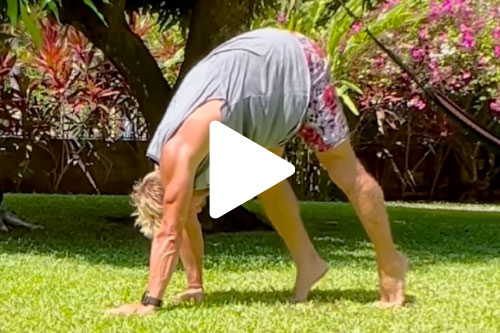 Preparing to surf with Animal Flow and Surfskates

Branden Roberts, founder of Surf Dojo in Costa Rica, has been surfing for 30 years and is another Animal Flow convert. The Surf Dojo method utilizes Animal Flow as the movement basis for his multidisciplinary approach to surf training on land.

“Ever since I first started surfing, I just fell in love with it and became completely obsessed with getting better. I’ve always trained in martial arts and other things to try to help me become a better surfer which has led me to my own training method. Now, at 45, I’m as strong as I’ve ever felt, I’m flexible and pain-free. I’ve found the method for that and it feels like I’ve found the fountain of youth for surfing,” he laughs.

In addition to Animal Flow, Branden’s method involves training on a ramp, riding a surfskate–a skateboard with specially-designed trucks that helps to re-create the mechanics and feel of surfing. He found that the combination of Animal Flow and riding the surfskate to be hugely complementary to one another, and to surfing.

“Animal Flow activates those muscles that we use for the three foundational movements of surfing: extension, compression and rotation,” explains Branden. “It’s great for balance, coordination and all the things that we need to be a good surfer. We train Animal Flow first to, in a sense, wake the body up.”

Branden noticed an immediate improvement in his body awareness as soon as he began practicing Animal Flow. He found the system in 2016 when he was on the hunt for something that could improve his flexibility and movement efficiency.

“I was doing a lot of Jui Jitsu and I’d found [bodyweight training discipline] Ginastica Natural, which is a great form, but I felt like there was something still missing for me. That’s when I found Animal Flow.

“Right away, I could feel all of these little differences and a new awareness in my surfing. That’s hard to get in surfing because it happens fast. Unless you’re on a really long point wave, you don’t have a lot of time to practice it.

With the ramp and surfskate, the average run increases to around 45 seconds, with the typical session allowing for 20-30 runs. That equates to upwards of 15 minutes of time to train the same foundational movements of extension, compression and rotation, in a very surf-specific manner.

According to Branden, developing and maintaining a high level of physical fitness is not only what makes someone a great surfer, it’s what allows them to keep surfing for years to come.

“I think the number one reason that most surfers end up quitting is that they don’t stay flexible and mobile and their hips and core get tight,” explains Branden. “As soon as that happens, your extension, compression and rotation are over. That’s super frustrating as a surfer. Over time, if you don’t do what it takes to stay sustainable, it gets super hard to surf, super hard to pop up.”

“I see so many surfers get out of the car, grab their board, run to the beach, put on their leash and paddle out. But you’ve got to warm that ‘race car’ up. Especially if the waves are big. If there’s any size of consequence, you’ve got to be prepared for very fast movements and, if you wipeout, you can get tumbled really fast.”

Having spent countless hours analyzing the movements of surfing on a green screen and working with surfers at the Dojo, Branden is an advocate for the benefits of Animal Flow.

“Animal Flow offers it all, the mobility, the movement efficiency, and the conditioning part, too,” he says. “It helps build upper body strength, rotation strength, explosiveness and power; there are so many benefits to it.”

Both Simon and Branden see translation to surfing in a wide range of Animal Flow movements.

Simon is a big fan of the Form Specific Stretches which focus on building strength and mobility.

“Wave Unload is great for spinal mobility and moving between flexion and extension,” he explains. “Ape Reach is great to open up the arms, chest and shoulders which can get so tight from paddling, and Crab Reach is great for loosening up the neck and allowing rotation to flow down through the rest of the spine.

“The Beast Reach is similar to a duck dive. You take one knee into your chest, straighten your arms and you have to put a lot of power into it so it’s a great on-land exercise to prepare for duck diving.

“If you go for a complete Form Specific Stretch Flow, you really have everything you need to prepare for surfing.”

“It works on getting you low and in surfing that’s the number one style challenge–getting low from the knees rather than bending over at the waist. Maybe you do a few squats at the gym but there’s nothing like getting low and going through movements consistently.”

“I love the Pop Out for the frontside turn practice, it’s basically the same mechanics as a Snap.”

“This combination is like a frontside turn. The hardest thing for people when they do a frontside turn is coming back over their board and re-entering because they don’t have the core strength. So moving between a Crab Reach, Ape and Baboon is a great way to train that.”

In the video below, you’ll see Branden and two of his students demonstrating a combination based on the Pop Out.

Going from strength to strength with Animal Flow

Branden doesn’t just think that Animal Flow is valuable for surfers, he knows it. It’s also played a vital role in the growth of his business.

“It’s been beyond my dreams of success so far, and super accepted by the local people,” he smiles. “Phase 2, which we’re about to start, will see the addition of 4 cabanas that each sleep three people, plus a big outdoor kitchen, a training pool, jacuzzi, a couple of ice baths, another ramp and the expansion of the Flow space to be even bigger. We’ll be offering camps primarily for intermediate to advanced surfers but the Surf Dojo is for everyone who wants to get better at surfing.”

“I love Animal Flow and it’s got to be, in my opinion, the number one cross-training tool for any high-level athletic sport. I would say it’s the best because of the wide range of benefits that you get out of it. It develops the human. It’s not just a workout or a way to look cool; it truly helps to develop the human in a very positive way.”

New to Animal Flow? Follow along with Animal Flow creator, Mike Fitch, as he guides you through this 30-minute beginner level Animal Flow class. You’ll learn and practice four Level 1 movements (Loaded Beast, Front Step Through, Underswitch, and Jumping Side Kickthrough), then build them into a Flow. All you need is your body and a little space!