How four practitioners strengthen their practice with Animal Flow

Animal Flow is not a martial art or system of combat. At its core, it’s a methodology of betterment. As Flowists, we aim to improve the function, connection and communication of the human animal. That’s why you’ll hear avid proponents of the system refer to it as a ‘practice.’

Our global community comprises a sizeable number of Flowists who are astonishingly good at other physical pursuits. It’s hardly surprising given the way that quadrupedal movement training such as Animal Flow acts as the adhesive that brings other training styles together.

Anyone can try it and be successful at the practice. There’s somewhere for everyone to start and aspire to, in whatever way speaks to the individual. And there is a never-ending level of challenge and proficiency that your practice can progress towards, if you’re inspired to take the journey. It provides the opportunity to search for self-mastery, through physical expressions of what lies within.

It’s here that the paths of martial arts and combat sports (MACS) and Animal Flow align.

To celebrate the release of Animal Flow for Martial Arts and Combat Sports (MACS), we caught up with some of our multi-talented Flowist community members to find out how they combine quadrupedal movement training with their MACS training. 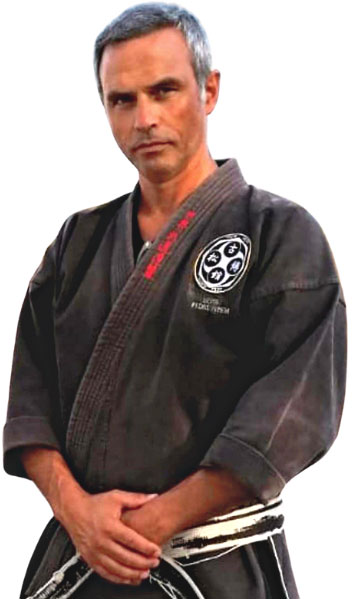 To say that Pedro Porém is a life-long student of martial arts would not be an exaggeration. The 50-year-old from Lisbon, Portugal, has been a student of countless disciplines since taking up judo in 1978.

Pedro’s true martial arts passion is Kenpo–a family of styles with ancient origins in Japan and China that has similarities to Karate and Kung Fu. Sensei Pedro introduced the style of Kenpo that he practices and teaches to Portugal in 1994. This ultimately led to the establishment of what is now known as the Portuguese Federation of Hawaiian Martial Arts.

A 7th Dan black belt, Pedro has 15 Kenpo schools across Portugal, serving 600 students, and two in Africa, where 150 kids learn the practice.

Pedro started seeing Animal Flow online in 2017. Observing its compatibility with a system that was already being taught in his schools, Kosho yoga, Pedro decided to take the L1 instructor certification in 2018.

“Since then, I began to share Animal Flow with my martial arts students,” said Pedro. “I can say that it’s very good because I have students from the age of four years old up to 80, and all love the movements.

“I find that it’s easier to teach to everyone than yoga. It has been amazing to see the evolution of my students, especially the older ones who are 40, 50, 60, and 70 years old. They can do the movements, it helps them with Kenpo and they’re growing more because of their Animal Flow practice. So I’m very happy with that.”

Pedro offers dedicated Animal Flow classes as well as incorporating it into each Kenpo class. Some of his students have also gone on to become Certified Animal Flow Instructors.

There is much transferability from AF to Kenpo. Pedro highlights the cross-over of Side Kickthrough and Front Kickthrough to the power development required for kicks in Kenpo. Scorpion Reach and Full Scorpion are also great choices for helping with the patterns of throws.

Injury prevention is high on Pedro’s list of the benefits he and his students gain from AF.

“With Animal Flow, we can prevent injuries because we’re making the muscles and articulations stronger for martial arts. Older martial arts practitioners have made a lot of mistakes by not warming up or preparing their bodies properly. I want my students to stay injury-free and to be able to practice for a long time to come. Animal Flow is very helpful for that.”

Miguel Caratão started practicing Jiu Jitsu “with a lot of intensity” in 2017. He rose up in the sport quickly, attaining his blue belt with two stripes and competing at both National and European Championships. His Animal Flow journey began almost simultaneously and equally rapidly.

Miguel progressed through Level 1 and 2 Certified Instructor ranks before becoming a representative of the program in early 2022, as a Regional Leader in Portugal.

The combination of Animal Flow and Jiu Jitsu seemed to be the perfect complement to each other, so much so that Miguel found his daily training routine changed significantly to prioritize them.

As a CrossFit coach and personal trainer, Miguel’s training fits in around the schedule of his gym and its students. In addition to his regular Jiu Jitsu training, he aims to do two training sessions each day, one of which is dedicated to AF.

Miguel explains that his sessions focus on “Flows specifically or technical work, or force or mobility accessory work. Then, according to my schedule and [programming] phase, I do weightlifting or functional training.”

The return on investment for incorporating quadrupedal movement training has been fruitful for Miguel.

“Any martial arts practitioner respects, and wants to enhance, the capabilities of their body to obtain a higher technical quality, more effectiveness, performance and durability,” he said. “The AF training system ensures all of this in a safe, effective and fun way. It’s also supported by science, which these days is super important for credibility.” 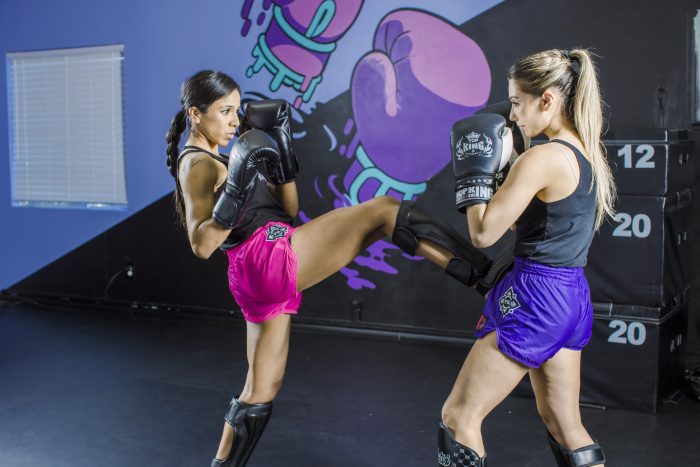 April do Nascimento, left, sparring with a training partner

As a strength and conditioning, kickboxing and Animal Flow coach, April do Nascimento lives and breathes both movement and MACS. The AF L2 Certified Instructor holds blue belts in Muay Thai and Brazilian Jiu Jitsu (BJJ) and is currently in training for her first Muay Thai fight.

April’s MACS journey began in 2015. After beginning with BJJ, she went on to pick up Muay Thai in 2017. However, it was adding regular quadrupedal movement training into her routine two years ago that helped April to see a notable improvement in her “overall performance as a Muay Thai fighter.”

“When striking, I can feel that I have more force behind each punch because I am more aware of turning my body from the ground up,” said April. “Also, the increased mobility and strength in my hips has helped me develop higher and stronger kicks when sparring.

“My technique has improved so much because I have better balance and coordination to perform each skill,” she explained.

Despite having over five years of experience under her belt, April has found that her BJJ practice has progressed as a result of AF’s influence, too.

“The last thing I need is to get hurt while training this sport,” April said. “Being able to include Animal Flow in my training really helps open and reset my body to reduce the risk of injuries.

“Also, since I drill Animal Flow movements that are similar to BJJ, I am more confident being explosive in certain movements. When rolling, I feel stronger in all positions and can apply a lot more pressure from having developed a stronger core.”

As she prepares for her first fight in the coming months, April combines a mixture of Muay Thai, Animal Flow and strength training.

“On the days I do strength training, I incorporate Animal Flow movements into my warm-ups and sometimes in the cool-down, depending on how my body feels! Something that I have been really enjoying as a way to train my mindset is Free Flow. Free Flow always reminds me to stay present, be mindful, and teaches me to adapt quickly to any given situation.”

Follow April on Instagram (@coach.april) or find her at her studio, MoveHER Fitness, in Burbank, CA, USA. 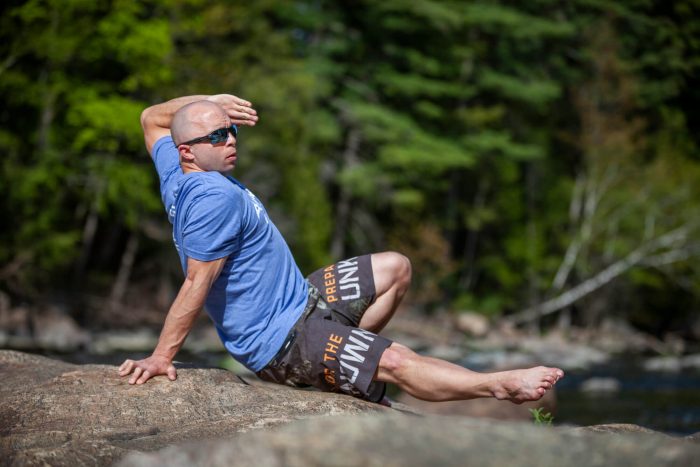 Jonathan’s foray into martial arts began in his teen years but it wasn’t until 2005 that he began in earnest. Jonathan gained experience in BJJ, Muay Thai, self-defense, judo, Systema, and Sambo, and throughout the years that followed, earned his current rank of 2nd Dan black belt in Aiki Ju-Jitsu Nintai Ryu.

“I started my [Animal Flow] journey in 2017 and got certified in 2019,” Jonathan said. “Animal Flow is, for me, what was missing in my practice. It allows me to center and return to calm after a class, and also to fill the gap between martial art and conventional training.”

Jonathan incorporates Animal Flow into his practice in the form of warm-ups and mobility, finding it helps him to be more aware of his body and the space in which he practices. He also finds cross-over between AF movements and the patterns required in his martial art. Including these movements allows the Sensei to “facilitate teaching and learning techniques.”

Perhaps most importantly, practicing quadrupedal movement training in the form of Animal Flow has provided a way for Jonathan to strengthen mentally.

Jonathan explained that the years of intense practice, multiple concussions and high stress left him with neurological damage, which led him to Animal Flow.

“My doctor strongly suggested cognitive exercises in order to strengthen my mental awareness,” he said. “For me, Animal Flow has represented a way of life and practice far beyond what I’ve experienced before. I am a prime example of how impactful this movement practice can be for someone with a neurological injury.”

Animal Flow for Martial Arts and Combat Sports is available now! Including over 230 pages of content, this complete multimedia product comprises more than 170 videos including access to Level 1 movement tutorials.

Chapters cover a range of popular disciplines as well as injury prevention, energy systems development, and strength and conditioning.