Animal Flow: From Theory to Practice 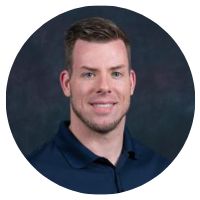 Whether you’re a frequent or occasional reader of The Flowist, you have probably noticed how versatile Animal Flow practice can be. From rehabilitation to artistic expression, Animal Flow has a diverse range of applications and a supportive community, which is so important for achieving goals.

Animal Flow is great as a stand-alone fitness program, yet it has also been used to augment other training programs and enhance athletic performances. Unfortunately, new fitness programs are often misunderstood and sometimes met with skepticism or uncertainty. Understanding the theory and practice of Animal Flow from a scientific perspective has wide-ranging benefits such as giving the instructor the intellectual tools to gain buy-in from a client or assisting the enthusiast in enhancing their existing training program.

Like any practice, there is usually an abstract theoretical framework we must first grasp to appreciate and extrapolate its application in the real world. Animal Flow is no exception. Perhaps you have read the article in The Flowist highlighting a recent research study about the benefits of quadrupedal movement training (QMT), or this article about the importance of fundamental movement skills for youth athletes. You might also be curious about why infant or animal locomotion might be beneficial for kids and adults. Some of these concepts have a solid scientific basis. For others, there is only theoretical speculation. Although research on QMT is in its infancy, there is still plenty of practical evidence to share. 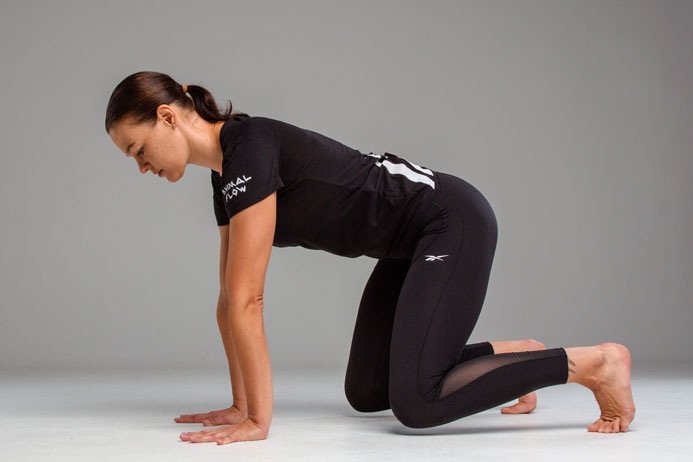 While still in its infancy as a field of dedicated scientific research, quadrupedal movement training such as Animal Flow is steeped in practical evidence.

The Connection Between Human and Animal Locomotion

Quadrupedal motor control mechanisms appear to persist in humans. Common in all vertebrates are autonomous neural circuits called central program generators (CPGs), which are believed to be evolutionarily derived (1). CPGs control the coupling of the arms and legs giving rise to bipedal and quadrupedal locomotion patterns in humans and animals, respectively. With the use of sensory inputs, a nervous system process called neuromechanical tuning alters CPGs in relation to the limits of bodily structures, specific task constraints, and environmental obstacles. For example, a stretch reflex in the lower leg adjusts arm swing to counterbalance trunk rotation during upright walking and running.

One study showed that ascending sensory nerve signals preceded counterbalancing arm movements while stepping over objects during walking (2). Despite these quadrupedal mechanisms, the entire human musculoskeletal system has evolved for upright locomotion (3). Moreover, evidence has shown that humans are the least efficient during crawling compared to altered bipedal locomotion patterns (4).

Taken together, these facts highlight the broad adaptability of the human nervous system to solve complex movement problems. We can say with certainty that Animal Flow provides practitioners with a system for increasing their movement skill repertoire which we already know has profound effects on joint range of motion, joint proprioception, and cognitive function (5,6). 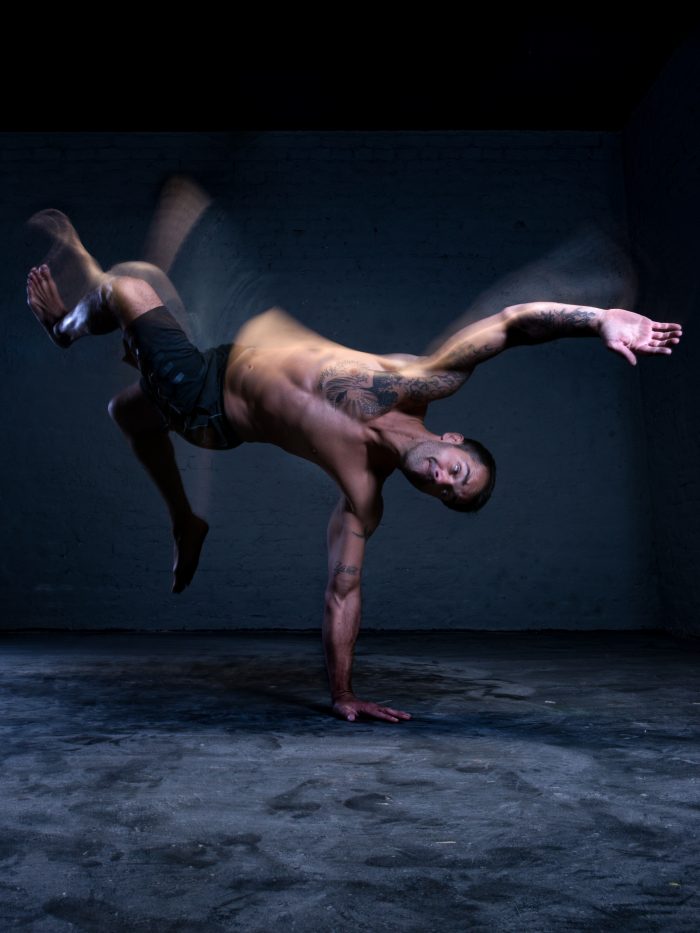 The human nervous system is highly adaptable to the challenge of solving complex movement problems.

The Importance of Crawling During Development

Human motor development is often referred to as the progressive “head-to-tail” development of sensory perception leading to postural control, object manipulation, and locomotion (7). Developmental delays may be indicative of physical and cognitive disabilities so health professionals pay particular attention to age-appropriate motor milestones. Crawling is an important stage of development whereby infants begin independently exploring their environment causing leaps in motor and cognitive development (8). However, it is unclear how important crawling is for motor development after the onset of walking, considering that babies prefer walking despite initially being more efficient at crawling (9). This leads us to a question rife with academic debate that pervades several professional fields involving applied human movement science. Are basic or fundamental movements building blocks of complex movements?

It’s easy to get on board with the idea that competence in simple movements precedes proficiency in complex movements, or simply, the transfer of one skill to another. Broad acceptance of this logic has lead to the popularity of emphasizing fundamental movement patterns in fitness. For example, the crawling posture is part of assessments of motor control in adults (10, 22). Yet, despite less practice and more variability in gait patterns, Cole et al. (2019) found no differences in crawling ability in children and adults compared to experienced crawling infants (11). Why? Because movement skill advances naturally throughout childhood and adolescence not only because of experience interacting with the environment, but also as a consequence of growth and maturation. Humans are destined to become good at upright locomotion. So why crawl slow when you can run fast?

After humans become proficient in walking, running, and manual dexterity, skill expansion and complexity improves through deliberate goal-oriented practice and consistent exposure to novel movement challenges. In fact, there is little compelling evidence that performances in fundamental movements translate to other skills or even closely-related skills (12, 13). This is because of an emergent property of our nervous systems, which is called self-organization. The human motor control system organizes coordination, range of motion, speed, and even force production according to a set of cognitive inputs and sensory constraints specific to each task (14). Performance is further refined through experience and feedback on task achievement. Therefore, you should take the adage, “you get better at what you practice,” as literally as possible. For example, if you want to stick a Tuck Balance, the fastest route to get there is to practice variations as close to a full Tuck Balance as possible. Getting technical feedback from an instructor or fellow Flowist to optimize your practice is also key to consistent progress. 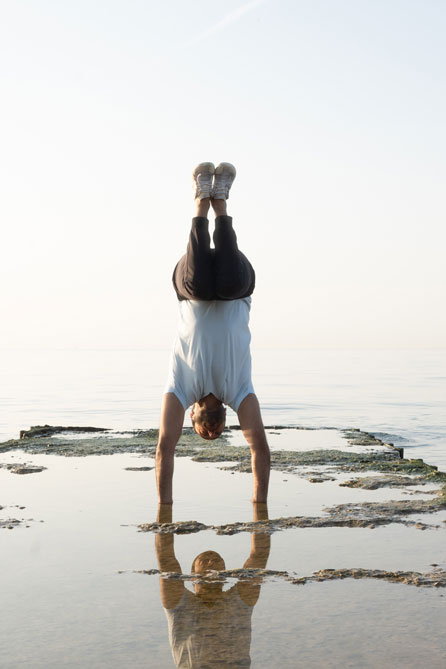 There are very few studies using specific QMT protocols such Animal Flow, which have been reviewed in The Flowist here and here. However, you could say QMT research was started by a well-known spine expert called Dr. Stuart McGill, who was interested in core exercises that optimized stability while reducing back injury risk. One of the most widely-used core exercises popularized by McGill is the bird-dog or quadruped, in which the participant performs limb reaches on all fours. Quadruped exercises activate dynamic core stabilization patterns that are well-tolerated in low back pain sufferers due to lower spinal compression forces (15). Core stabilization exercises such as quadruped variations promote spinal stiffness which improves functional ability and lowers injury risk (16, 17).

During the stance phase of hand-foot crawling:

Perfect alignment between theory and practice is a rare occurrence, however, it’s not always necessary. We can extrapolate that the benefits of QMT are related to our natural inefficiency at moving quadrupedally. Yet, the vast adaptability of our nervous systems allows us to master increasingly complex movements while reaping a number of functional benefits. There is so much more to learn about QMT skills and the added benefits of Flowing. We have only begun to scientifically confirm what we practitioners have already learned intuitively from the Animal Flow system.

Dr. Eckart is an Assistant Professor and the Program Coordinator of Exercise Science at Kean University in New Jersey, USA. He holds a doctoral degree in health sciences and a master’s degree in exercise science. His research interests include therapeutic exercise, the effects of exercise on aging and brain function, motor learning and control, and neuromuscular training.

Interested in more of the science behind Animal Flow? Take a look at some peer-reviewed, published studies from around the world that incorporate Animal Flow movements.