Movement for Everybody and Every Activity

Animal Flow can be the glue that holds your world together

“Who is this exercise good for?”

It’s a question that you’ll hear our Master Instructors ask multiple times throughout the L1 workshop. It’s almost always met with the same response from attendees: “Everyone.” We follow this common answer with an invitation to probe deeper and consider specific applications but the truth is that almost every movement in Animal Flow can be of benefit to almost everybody–and every body.

The science behind Animal Flow shows this to be true but we wanted to find out whether that translates over to community experience, too. We talked to eight Certified Instructors from around the globe to find out how Animal Flow helps them be better at other activities in their worlds. 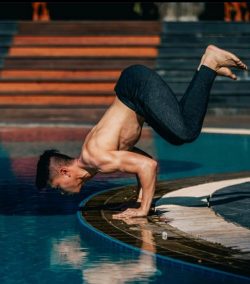 “‘Calisthenics’ comes from the Greek word meaning beauty and immortality. It’s focused on developing impressive strength and a superhuman physique, using only your body weight and gravity as resistance. I’ve been doing calisthenics for over 10 years and Animal Flow for more than four years. Animal Flow has helped me realize my own body’s abilities and limits, and worked to prepare it better for the calisthenics movements I perform. I also use it with my clients; it’s helped me to identify and correct their weaknesses and postural imbalances. I’ve also been able to teach them about Calisthenics by using a lot of the same cues from Animal Flow.

Animal Flow made me fall in love with Calisthenics more than ever before. It’s allowed me to control my body and feel super strong, even when I’m working against gravity. I’ve also unlocked most of the mobility needed for efficiency and success in Calisthenics just by Flowing every day to my favourite songs.”

“I’ve been practicing and coaching pole dancing for five years, in addition to having a two-year break while having a baby. Animal Flow helps me to connect to the ground so I’m then ready to fly on the pole feeling steady and confident. No matter whether I’m going to be doing inversion work, flexibility or strength tricks on the pole, I always prepare with a sequence of drills or by practicing a Flow.

Pole fitness is practiced on a vertical pole and combines elements of acrobatics and dance. I already had a background in fitness and dance when I started which allowed me to progress quickly. Once I heard about Animal Flow and attended the L1 workshop, everything changed.

AF facilitates the inversion work on the pole. It promotes multi-planar (moving in multiple directions) training which is integral in pole fitness. The quadrupedal work sends valuable information to the brain about the position of your shoulders in space, which is so important for pole dancers but can be very hard to understand while performing a trick on the pole.

There are so many more ways that AF is beneficial for pole dancers. It wakes up your system, and makes you see through your hands and feel through your feet, even with your eyes closed.”

“As a mother, the time I spend practicing Animal Flow has become my escape, my ‘me time’. It’s my version of meditation; it keeps me grounded. When I’m Flowing I only think about my body, how it’s moving in space, and nothing else. Occasionally I hear cartoons or superhero movies in the background but my main focus is the movement. I always finish feeling relaxed, refreshed, and ready to take on anything.

Animal Flow is not only a great way to clear your mind and find a true mind-body connection, it’s also the perfect way to role model movement and health. Sometimes they’ll join in but even if they don’t, they’re absorbing it.

My kiddo is usually running past me, over me or around me when I Flow. Sometimes he’ll do burpees behind me when he knows I’m filming myself. Occasionally he’ll even do a Scorpion and ask me how it looks. Kids are always watching.” 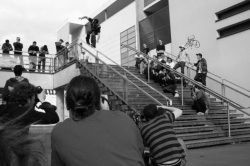 “I’m an aggressive inline skater which means that I cruise through street obstacles and skateparks performing stunts, grinds and jumps on my rollerblades. I’ve been skating for over 20 years and practicing Animal Flow for four years.

I can see a lot of similarities between AF and rollerblading. You can do them almost anywhere at any time, they’re both a great way to explore the world around you, and each have their own worldwide community. I also love that you can express your individual personality and creativity, and there are no limits to what you can achieve.

Animal Flow has really helped me with balance and body control. When I do grinds (which is where I slide along a ledge, bench, handrail, etc) my legs now feel really stable and strong. I’ve noticed that I fall a lot less, and when it happens I have more control and usually manage to save the situation! I also think Animal Flow has helped to train my vestibular system as I can do spinning tricks with more ease than ever before.” 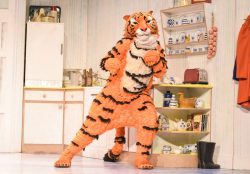 “I’m an actor in ‘The Tiger Who Came to Tea’ which is a popular children’s book in the UK, written by Judith Kerr. I’ve helped bring the story to life in the stage adaptation, and have performed up and down the country, including in London’s West End. One of the roles I portray is the role of the Tiger himself. The character has no lines so has to communicate everything through gestures and body movements. Animal Flow has given me a better understanding of how to articulate my body to express the story as well as keeping me healthy and strong to be able to perform a physically demanding role for as many as three performances a day. After studying Musical Theatre at Bird College, I graduated in 2010 and have been working professionally since. At 6′ 6″ (1.98m) tall, I have found it very difficult to have control and ownership over my body in the past. However, a huge part of being an actor is your physicality on stage. Animal Flow has really helped me unlock confidence in my body and what it can do.” 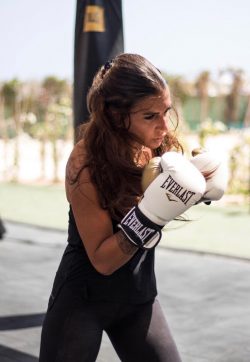 “Muay Thai or ‘Thai Boxing’ is a stand-up combat sport that incorporates strikes (using fists, elbows, and legs) and clinches (which are standing grappling moves). I’ve been a fighter for 10 years and I’m also an instructor. I’ve been practicing Animal Flow for two years now and it’s definitely made me more mobile and flexible, and it’s increased my stability, too. I incorporate it into my training by using it for my warm up but I also have dedicated Animal Flow days, too. Animal Flow is such a great complement to Muay Thai. I always say that they go together like peanut butter and jelly!” 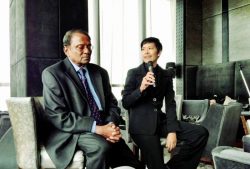 “After being an entrepreneur for many years and running my own business, I became a COO for a fund management company about three years ago. I manage the whole operation which covers money investment, building rental, charitable involvement and more. Animal Flow has had a big impact on my ability to be good at what I do. On the physical side, AF keeps my body happy and strong so that I can perform my duties all day with ease. It also helps to keep my neck loose after a full day of desk work. Mentally, AF reminds me that nothing is impossible if you are willing to change, learn and work. It reminds me that all great things start from a small step, and that finesse and attention to details make all the difference. When I started Animal Flow, it was not something I was accustomed to. Taking it up in my 50’s is something that I’m proud of.” 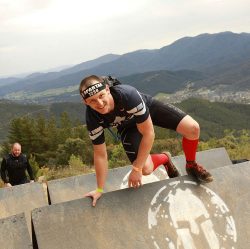 “Obstacle Course Racing (OCR) involves a trail run, ranging anywhere from 5 km (3 mi) and 50 km (31 mi) with obstacles of various forms thrown in your way. These generally include structures to climb over, traverse through, or crawl under, as well as the pushing, pulling, and carrying of heavy and awkward loads. I’ve been doing OCR for five years and Animal Flow for six. So much of what we practice in Animal Flow is built on the idea of contralateral movement, where the opposite arm and leg work together. Even AF essentials like Activations, Traveling Forms, and the humble Underswitch rely on building and coordinating strength and tension through the body to these opposing limbs. In OCR, whether it’s vaulting, climbing, crawling or running, most of the obstacles we face rely on this exact same strength. Any time I’m vaulting over a barrier, it’s the same motion as an Underswitch. When I’m traversing down a cargo net, a Forward Traveling Crab fits the bill perfectly. Crawling under a net? Can’t go past a Traveling Beast or Crocodile Crawl to get me through the obstacle. The beautiful thing for me is that I don’t really need to do anything special to incorporate AF and OCR. Animal Flow practice, as it is, has massive carry over.”

Animal Flow is the chosen bodyweight movement method of athletes from a wide range of sports. Find out why martial artists and combat sports athletes are some of the biggest advocates for ground-based training. Our latest book, Animal Flow for Martial Arts and Combat Sports, launches in November 2021.