If there’s one thing we love about the exponential growth of work-from-home roles these days, it’s being able to adopt pajama bottoms as acceptable work attire. But, as with many wonderful modern-day conveniences, the benefits don’t come without their share of downsides.

Spending excessive amounts of time in hunched-over computer posture is hurting us, both kids and adults alike. We know that most of us could do with adding more movement into our days. It’s not a new problem but it’s one that has definitely escalated as a result of ever-increasing hours in front of our computers.

A new study has emerged that looks at the effects of Animal Flow practice on pain and core stability of e-sports players. Around ⅓ of competitive gamers report low back pain, ranking it the number one site of musculoskeletal pain for players. Animal Flow L1 certified instructor, Ko Young-Woo, from Seoul, Korea, was one of two researchers who conducted the study at Chung-Ang University.

After practicing Animal Flow for a year himself, Ko identified that the benefits could extend to those who had a more sedentary lifestyle. “As modern civilization continues to develop, the convenience we seek in our lives also increases. Driving cars, using computers or mobile phones has become more frequent and, due to COVID-19, the restrictions on outside activities has caused us to move less. We’re more exposed to various conditions such as musculoskeletal disorders and weaknesses. I wanted to understand if Animal Flow is valuable for optimizing the movement of individuals who experience these issues.” 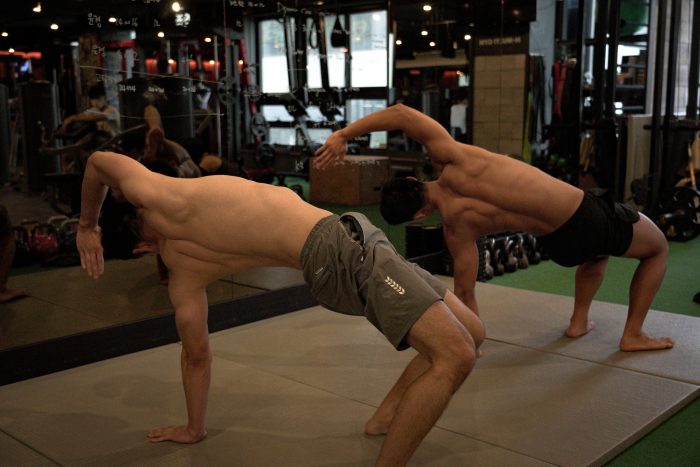 Pain experienced by the subjects was assessed using the Visual Analog Scale–a self-assessment where participants identify their current pain level on a scale of 0-10. Core stability was assessed by measuring the duration spent in various positions.

Animal Flow: necessary exercise for for the general public

This is great news for Flowists because it provides added support to the understanding that Animal Flow is effective for improving core stability. Not only that, it’s also highly effective at reducing back pain in individuals who spend long periods of time sitting in front of a computer. With a reported 65% of US adults experiencing low back pain through their lifetime, this study lends its weight to the use of AF as a treatment methodology.

“The posture of e-sports players who sit at a desk to train for a long time is not much different from students or desk workers,” says Ko. “Working or studying in a stationary posture for a long time without moving can cause a range of problems. I don’t think there is any other exercise that is as effective and fast as Animal Flow for improving these problems. I think Animal Flow is necessary exercise for the general public.”

Ready to see if Animal Flow can help your back pain? Discuss with your medical practitioner whether Animal Flow might be right for you and then try some of the movements for yourself with Animal Flow On Demand. Get started on your 14-day free trial and reduce pain and regain function from the comfort of your own home.