Climbing From the Ground up

Improve your climbing performance by training on the floor

For Aneta Lupa, replacing the initial sense of impossibility with an ensuing sense of achievement is what keeps her climbing. Over the past five years, Aneta’s love for climbing has grown and with it, her understanding of the elements and techniques that contribute to success in the sport.

Aneta’s an unusual sight at her climbing gym. While many others prepare their bodies with rowing machines and static stretching, Aneta’s preparing with her secret weapon: ground-based quadrupedal movement in the form of Animal Flow.

“Climbing is evolving,” says Aneta, who is an Animal Flow Regional Leader in Spain. “If you look at competition climbing now, the moves look almost like parkour or gymnastics. We’re jumping, we’re coordinating multiple movements and limbs at the same time. Many climbers are starting to take parkour classes to become better. Animal Flow is another really great way of training for climbing.”

A brain and body sport

Climbing is an incredibly demanding sport. Successful climbers combine strength, endurance, power, flexibility, mobility, and dexterity of both mind and body. Climbing requires a complex synergy between all of these abilities, relying on the successful integration of spatial awareness, balance, and coordination. 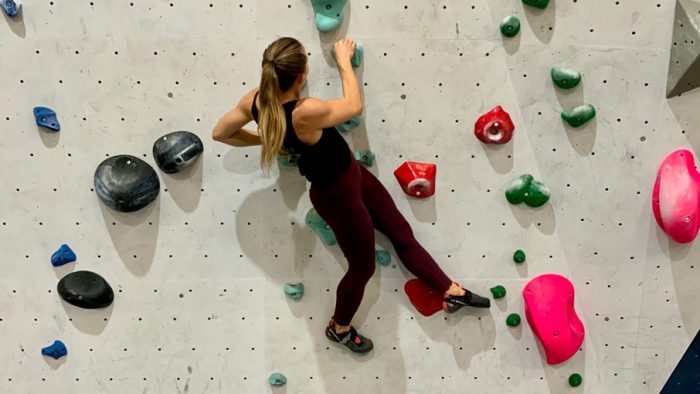 In a systematic review conducted in 2019, researchers looked at the successful determinants of climbing. A range of physiological, biomechanical and psychological factors was identified as leading to high climbing performance. When looking at just some of the physical determinants they uncovered, it’s easy to see why climbing is so demanding.

Given the high degree of success that climbers with well-trained forearms, wrists and fingers can expect, Aneta finds it fascinating that so few climbers seem to put much time into caring for these areas.

The hands themselves are required to access a range of novel grip positions, with the fingers and thumbs constantly shifting between isometric contractions and more dynamic changes of grip. Holds can require a wide range of grip strategies: from a single finger to an open hand, or a ‘full crimp’ position where all fingers squeeze tightly together in an aim to fit all tips onto a tiny piece of wall real estate.

While duration spent in a single finger grip, known as a ‘dead hang’, has been found to be the strongest determinant of success in elite climbers, there are a number of other factors that can significantly support, or hinder, performance.

Team Great Britain climbing coach and head coach of Volume 1 Climbing in South East England, Belinda Fuller, refers to a pattern of ‘bicep abuse‘. When climbers rely too much on elbow flexion, the demands of climbing are placed heavily on the biceps which typically leads to low efficiency. Using straight arms more frequently and pivoting around the shoulder joint allows a climber to avoid unnecessarily expending energy in ways that are inefficient.

Spending too much time hanging from bent arms can also lead to ‘Climber’s Elbow’ (also known as ‘Golfer’s Elbow’ or medial epicondylitis). Hand and elbow injuries are among the most common in climbers, with a 2019 study showing that they accounted for more than 41% of all injuries.

You’d be forgiven for coming to the conclusion that hand and elbow injuries just means there’s a need for better hand and elbow training for climbers. While that could be true in part, an important piece of the injury prevention equation is efficiency.

Efficiency is arguably one of the most important goals for any climber. The more efficiently you can manoeuver your body weight up or across the wall, the less quickly you’ll fatigue. Efficiency is a combination of utilising correct technical strategies while having a body that is suitably prepared to undertake those strategies.

Postural stability is a critical determinant of being a good climber. Having a strong core that can rotate or resist rotation when needed forms a fundamental layer of this stability. Being able to resist rotation allows force to transfer from the feet to the hands without ‘leaking’ energy. If you don’t want to fall, you’ll need the ability to maintain tension and body position as you prepare for each movement in the route. Look at the best climbers in the world and you’ll see that they can all hold their bodies in space for longer periods of time, with bigger distances between their center of mass and the wall.

“Animal Flow and climbing are such a great combination,” explains Aneta. “I’ve been practising Animal Flow for the same amount of time that I’ve been climbing. I really believe it has helped me because so much of what we do on the ground transfers to what I need to be good at as a climber.”

Crawling and climbing: the perfect combination

Many Animal Flow movements transfer over to the shapes your body needs to find when climbing. Stretching your hand or foot further up or out requires the ability to move your hips, knees and ankles, as well as shoulders and elbows into their fullest range of motion.

Aneta loves Traveling Forms such as Crocodile and Lateral Traveling Ape Version 3/Reaching, Form Specific Stretches such as Crab Reach, and Switches and Transitions such as Front Step for training these novel ranges. 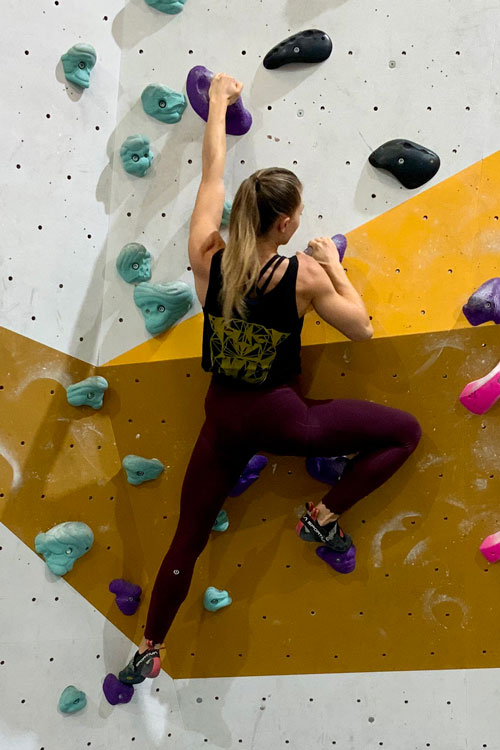 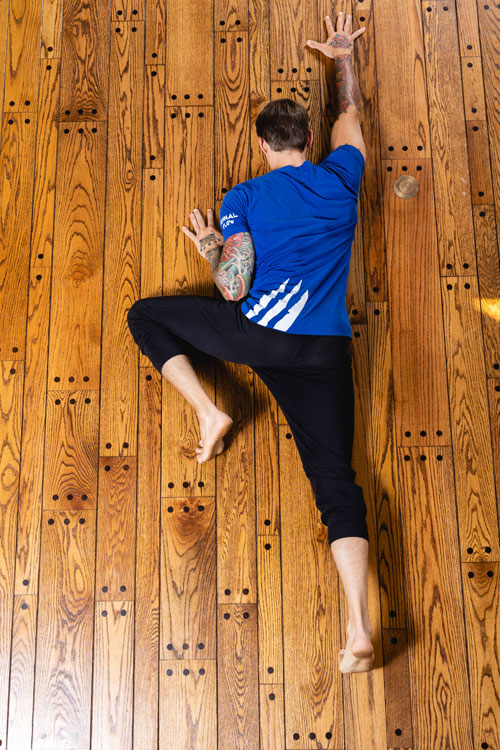 “One of the main rules you learn when you start climbing is to climb contralaterally,” Aneta says. “While there are moments when you have the same hand and foot on the wall, we usually move with the opposite limbs. This makes Traveling Forms an excellent way to train on the ground.”

Having your hands and feet on the ground marries well to the same requirement on the wall. This provides constant feedback to your brain about where your body is in space. As this two-way sensory feedback increases, so too your ability to react quickly to the decisions and movements that need to be made in climbing.

“We sharpen those connections every day with Animal Flow. It creates an extra layer of awareness that means that we’re improving that sense even when we’re not climbing.”

Solving puzzles on the wall and the ground

Incorporating Animal Flow into your climbing

“It depends on the day and what my body needs but I always start with Activations to prepare. Then I usually do a set selection of movements such as Crab Reach and Lateral Traveling forms but I’ll put them together in different Flows.”

“For climbers who are new to Animal Flow, I recommend spending 5 minutes on wrist mobilizations. Then spend 10 – 15 minutes drilling 3-4 movements and putting them together into a Flow.”

“I also like to practice 30-60 minutes of AF as active recovery on days that I’m not climbing.”

If you’re one of those climbers sitting on a rowing machine for 10 minutes then doing a few shoulder stretches before you climb, Aneta encourages you to try a different approach.

“I wish more climbers knew how beneficial ground-based movement can be for climbing performance. They really do complement each other; they’re a perfect balance.”

Watch the video below as Aneta shares one of her climbing warm-up Flows.