If you Flowed on August 28th, 2022, then you’re a part of Animal Flow history. On this day, International Animal Flow Day, the movement system was practiced in more than 25% of all the countries across the globe.

“We’re seeing the program continue to spread further around the world thanks to our inspiring community,” said Mike. “We started International Animal Flow Day at our instructors’ suggestions in 2021 and I’m so glad we did. The fact that we had so many more jams in more countries this year is a testament to their commitment to sharing the program.”

Watch some of the highlights from IAFD2022 below.

In Argentina, Regional Leader Gabriela Iñigo Carrera led a group of 40 Flowists who gathered in a park in the country’s capital of Buenos Aires. Sporting the colors of the Argentinian flag (blue and white), Gabriela was joined by fellow Regional Leaders Santiago Isola and Agustín Carmuega as well as new and long-time Flowists.

Not only did the participating Flowists have a great time but so too the many onlookers, some of whom approached the group to find out more about the jam.

“Absolutely everyone (I include the viewers here, too) had a huge smile on their faces,” said Gabriela. “I felt full and happy to see all those people who enjoyed being part of the group and the Flow.”

Another group who wore their flag’s colors was led by Aleksandra Zadka, Regional Leader from the town of Kołobrzeg, in Poland’s north.

“Kołobrzeg is a small town and I am very proud that we managed to gather as many as 18 people,” Aleksandra said.

The Flowists all dressed in red and white, including an attendee who was vacationing in the area at the time.

“I didn’t know her before,” explained Aleksandra. “She saw on social media that I had organized an IAFD jam and she asked if she could join because she was in Kołobrzeg. She also wore white and red; it was amazing!” 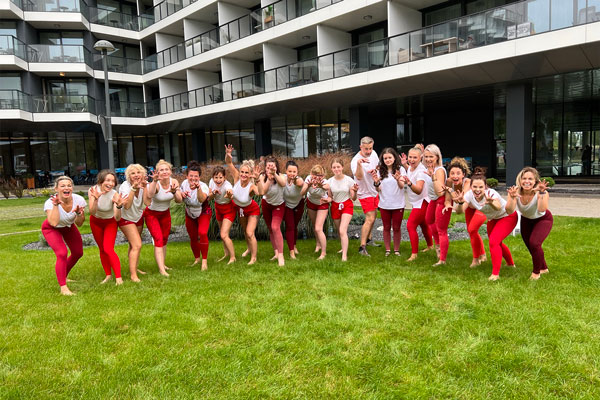 Sharing what you love and breaking ground

Cliff Empire from Doha, Qatar, hosted an impromptu jam as a way to continue to share the message of the program, which is still relatively unknown in his area.

“About a week out from IAFD, I informed my colleagues about it,” he said. “They know about Animal Flow because I’ve tried it with them once and they’ve seen me Flow often.

“Being able to practice and teach Animal Flow is a dream come true. I remember when I started about two years ago and people didn’t know what it was. They were laughing at me and asking what I was doing but it’s getting big now, people know about it.”

Cliff was joined by 15 Flowists, many of whom knew of the benefits but were yet to take up the practice. Where necessary, Cliff regressed the moves and spent plenty of time breaking down the pieces so that everyone could learn the Flow successfully.

“To be the one instructor teaching Animal Flow in the country is a big achievement for me,” Cliff said. “It has always been my dream.”

The common language, and common goal, of Animal Flow

The Flowists persevered in spite of scorching temperatures that reached 100°F (38°C) by as early as 9 am while also having to adhere to social distancing rules.

“Once we arrived and settled down, the lifeguards came over and verbally warned us about calling the police if we continued to have such a big group gathering,” said Shin.

“But the harder it got, the more determined we were to get the jam done–without being arrested,” he laughed. “We divided into small groups to practice and teach the new Flowists, spreading across the beach to keep socially distanced.”

The group were insistent on getting the job done. Once they had all practiced and were ready to film the final Flow, they had to perform it as a flash mob in order to avoid risking arrest.

“We’d get together to Flow then run away from each other as soon as we finished. That was such a fun and exciting experience for us all and I think it actually created a much stronger sense of togetherness for the whole Hong Kong Animal Flow community!”

Despite the challenging circumstances, the Hong Kong jam was a huge success. Flowists ranged in age from their 20s to their 60s and spanned all ability and experience levels.

“The thing that touches me the most is they didn’t just come to learn Animal Flow. Most of them came to be part of the Hong Kong AF community, to meet friends and to sweat together,” Shin explained.

“Some of us didn’t even know each other. When we got together, we mingled like old friends because we all use Animal Flow as our common language.” 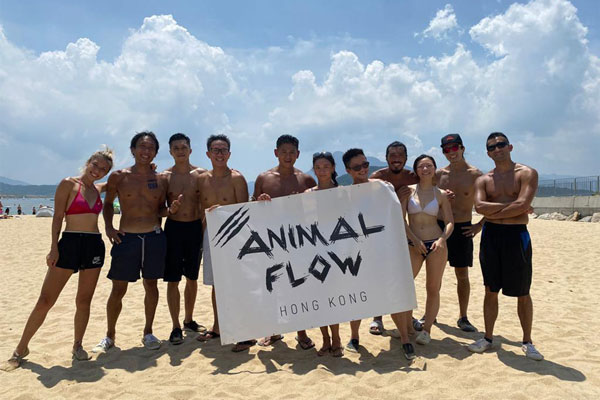 The power of connection and progress

It’s hard to articulate the true power of knowing you’re a part of something that moves people towards more connection, to themselves and others. While the feeling may defy explanation, it’s a future that the whole AF community strives towards together.

Gabriela explains: “There is a word in Spanish that perhaps defines it. ‘Provagar’ is the term and it means to keep progressing. It is what I wish from my heart and soul; I want to continue adding to this incredible activity, transmitting knowledge and learning more every day.”

And for everyone asking whether there will be an International Animal Flow Day in 2023? Absolutely. Program creator, Mike Fitch, once said, “Whatever we can imagine, we can make happen.” We’re just getting started so come and join the community.

It’s not too late to become an Animal Flow Certified Instructor in 2022. We’ve got a range of online and live workshops scheduled across the world every month, covering both L1 and L2 programs. For more information or to register, visit animalflow.com/workshops today.