Strengthen your game by getting down on the ground 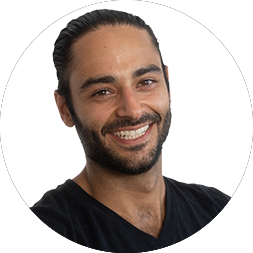 In Part 1, we discussed how Animal Flow is a great way to warm up before you hit the links. Many of the movements used in AF allow you to move through positions that allow you to mimic different parts of a golf swing. Additionally, it can also help you extend your range of motion and increase your swing power.

Beyond warming up, becoming physically stronger can help you make gains on the green, too. A stronger body can mean greater shot power and less susceptibility to injury. The question: which parts of your body do you need to strengthen, and how do you strengthen them?

Let’s consider the mechanics of a golf swing. A fluid golf swing is not only the result of a coordinated sequence of muscle activation, it’s also a thing of beauty.

If you can improve on each of the below elements, then your swing and your overall game will improve, too.

With each part of your swing, you activate and rely upon different lines of tissue. The phrase ‘lines of tissue’ refers to the way that muscles and connective tissues (such as ligaments, tendons and fascia) link up, working together to produce and transfer motion.

These lines of tissue are also often referred to individually as a ‘sling’, ‘chain’ or ‘train’.

Before we dive into which Animal Flow movements can be utilised to help improve the mechanical elements covered above, let’s look at a few of those lines.

This refers to all the tissue on the front side of the body that is responsible for flexing you forwards. It can also stop you from falling backwards when upright. The muscles that cross the front of the hips (connecting your lower body to your torso) play an important role in stability and power during your golf game.

Static Beast and Front Kickthrough are two movements that focus on developing strength, stability and power through flexion chain. 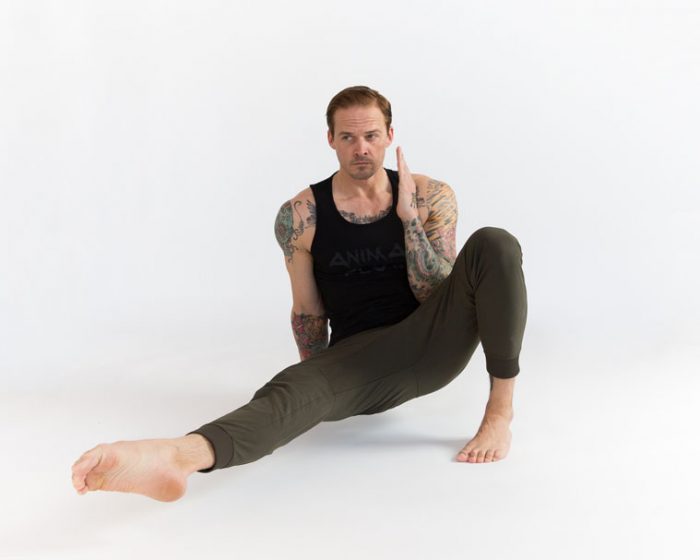 These lines cross the front and back sides of your body like an “X”. These slings are responsible for the rotation of your upper and lower body. Training these lines of tissue will help you gain and control power through rotation.

The anterior oblique sling connects one hip to the front of your opposite shoulder.

Side Kickthrough and limb lifts in Beast challenge the anterior oblique sling to rotate and resist rotation, respectively. 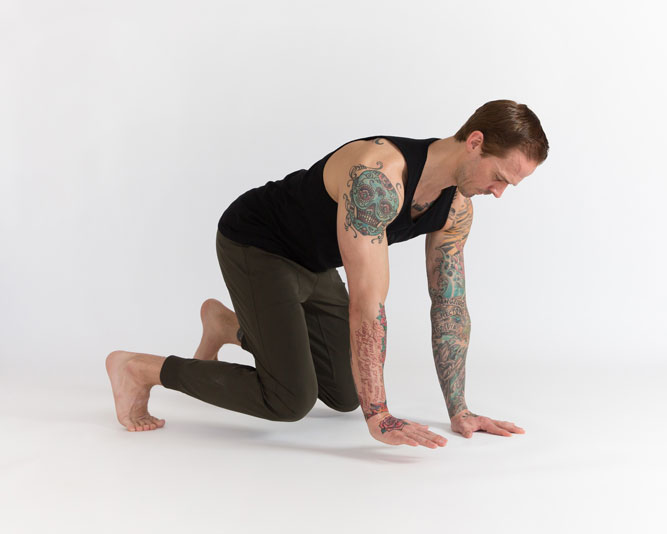 Lifting opposite hand and foot in Beast, known as contralateral limb lifts

The posterior oblique sling connects one hip to the back of your opposite shoulder. 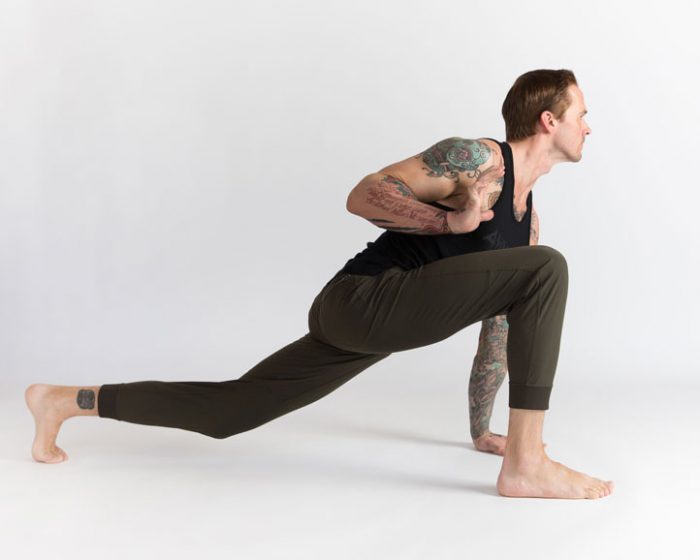 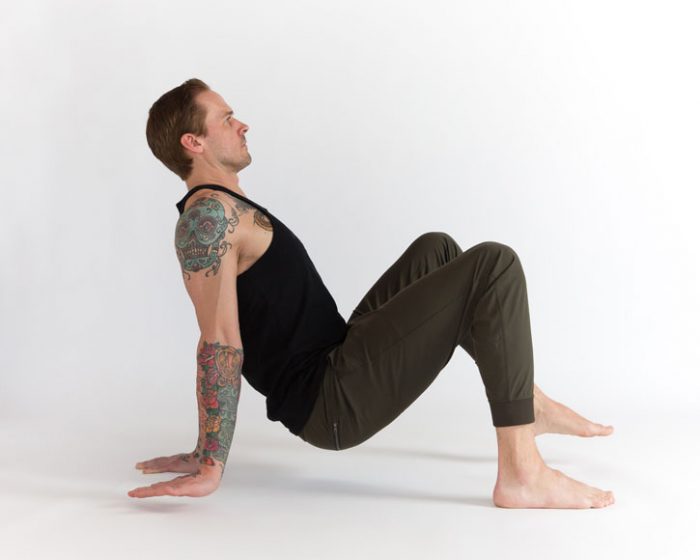 Lifting opposite hand and foot in Beast, known as contralateral limb lifts

Throughout the Animal Flow program, we are constantly challenging these lines of tissue in various ways. By ‘challenging’ them, I mean that we are exposing them to movements that strengthen them.

The following movements focus specifically on mastering control of rotation, generating power through rotation and generating power out of your hips. They can be incorporated into your existing program, either as standalone drills or by sequencing them together into Flows of any duration.

Before you can start to gain power through rotation, you need to learn to control it. Using the Underswitch (US) is a great way to achieve this.

The goal is to switch between two base positions, Crab and Beast, as slow and controlled as possible. You’ll begin by lifting your opposite hand and foot from the floor which immediately activates the oblique slings you use to swing the club.

As you switch between Crab and Beast you’re strengthening the connection of these lines of tissue, creating greater control of rotation. Being in better control of your rotation makes for a smoother swing and more strength. In golf terms, that means BOMBS AWAY off the tee and throwing darts into the green.

Once you master the US, you can increase the difficulty by speeding up or slowing down.

Once again, you’ll start in either Crab or Beast and initiate the US. However, rather than coming to a dead stop at the end, instead, you’ll ‘tap’ your traveling hand and foot then quickly return to your starting position.

Focusing on speeding up to rotate, slowing down to tap, then repeating in the opposite direction. This acceleration and deceleration is a great way to increase control over rotation at a higher speed. This can translate to your golf game by helping you increase your swing speed without losing control.

The goal of a SKT is to lengthen and load the anterior oblique sling in the kicking position, building power through rotation. Loading this line of tissue in a lengthened position increases the demand.

Additionally, in the kicking position, your spine is rotating out of your hips and pelvis in a way that mimics the rotation needed in the backswing.

This is easily my favourite movement for increasing power on your downswing.

This has two benefits for your swing:

Up to this point, I’ve looked at controlling and generating power through rotation. The Front Step (FStep) will help you find power in your hips, which is where the power in your swing comes from.

To perform this, start in Loaded Beast and move explosively into FStep. The stronger and more explosive your hips are, the faster and more powerful your swing becomes. Speed and power = maximum distance. There is also the added benefit of better hip mobility while moving in and out of Loaded Beast.

Front Kickthrough (FKT) provides all the same benefits as the FStep except now instead of stepping, you jump.

This action introduces a tension-relaxation cycle that is incredibly important for when the club contacts the ball. Starting in Loaded Beast, you jump forward landing on one foot, bringing the opposite leg forward into the kicking position.

Tension, or kinetic energy, is generated in Loaded Beast in much the same way as when an arrow is loaded into its bow. Now visualize that arrow being released. As you jump forward explosively, that Loaded Beast tension is released and relaxed, propelling your body into the kicking position. On landing, you generate tension again, bringing yourself to a stop.

Being able to be relaxed through your backswing and downswing, then creating maximum tension as the club impacts the ball is the ultimate expression of power.

Building strength and power through range

Beyond helping you become stronger and more powerful, a regular Animal Flow practice can also play a huge role in helping you gain more range of motion. Range of motion is the measurement of movement (distance and direction) that is available at a joint. The more I can move a given joint through its desirable motions, the larger the range of motion.

Increased range of motion is vital in golf for two primary reasons:

For instance, think about your usual swing. Now imagine that you could only rotate half as far in your backswing. It’s likely that you don’t even need to try it to know that it’s going to result in a shot that doesn’t go nearly as far or high as you want.

Joints and connective tissue that can move through more degrees of motion are more resilient. Having good range of motion, and good control over that range, typically translates into fewer injuries.

Golf is a demanding but ultimately rewarding sport. Becoming a better golfer does not only mean practicing on the range. It means training specifically for your game, off the course. Incorporating Animal Flow into your existing workouts will not only improve your ability to swing; it will also build a more resilient body that will keep you swinging for decades to come.

Happy hips are the powerhouses of a powerful golf game. For more hip-focused Flows, read Daily Movements for Healthy Hips.