Ryan Hurst: As Long as It Takes

How capability precedes freedom, and why it takes time

Ryan Hurst is animated and funny, hopping in and out of different accents and characters as he talks. He’s also shrewd and forthright, dropping insightful maxims with as much aplomb and regularity as he drops jokes, which is often.

In addition to being a dedicated husband and father of two, Ryan’s official accomplishments are many: state-level competitive gymnastics for over a decade; black belts in Kendo, Judo, and Shorinji Kempo; and a purple belt in Brazilian Jiu-Jitsu. Equally as impressive is the range of other physical pursuits that he’s studied to date: yoga, running, swimming, surfing, free-diving, hand balancing, calisthenics, parkour, and more.

A life of movement

After beginning gymnastics around the age of six, Ryan competed all over the USA for more than a decade. At 14, he found a passion for martial arts, becoming dedicated to practices that would ultimately lead him to his adopted home of the past 25 years: Japan.

With physical activity playing a central role in his world from such a young age, it’s little wonder that Ryan does what he does. As co-founder and head coach at GMB, Ryan harnesses his 40-plus years of movement to help people expand the boundaries of what they can do with their bodies.

“The one thing I’m here to do–what I’m really, really good at,” Ryan says without a hint of self-aggrandizement, “is look at a movement, reverse engineer it, and break it down so that anyone can learn it, at any level. I can teach the fuck out of anything.”

“One of the things that I respect most about Ryan is that he can take the most complex, high-skill exercise and make it attainable to anyone,” says Mike. “He does it in a fun, super-practical way that creates a really conducive environment for learning. That’s what I consider to be one of his many superpowers. He’s also really humble, so even though he is a badass, he teaches without ego, which I think is rare.”

From athlete to coach

Ryan loves what he does. He doesn’t have to tell you that for it to be obvious. His joy for the exploration of movement oozes out of him as he talks about his background, mentors, and philosophies.

He credits much of his career to the guidance of 2009 USA Gymnastics National Junior Olympic Coach of the Year, Mark Folger. “Mark was the catalyst for me doing what I’m doing now,” says Ryan. “So much of what he taught me as a teenager is the foundation of how I coach, and approach training, today.”

When it comes to others, his sole goal is to help people become better at what they want to do. As for himself, it’s simple: “I’m 49 years old. I just want to be that old guy still doing that thing.” 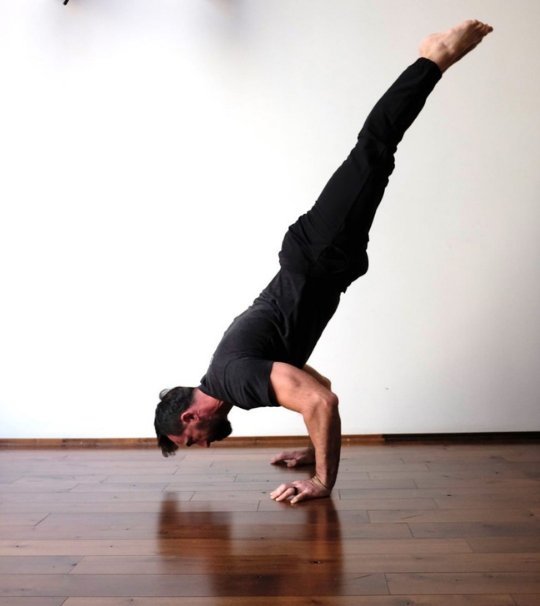 Ryan demonstrates a handstand push up

Our conversation is punctuated with many of the wise principles that govern Ryan’s movement philosophy. It’s an extensive list but the following six appear to most succinctly summarize the style that Ryan’s best known for.

Ryan isn’t a fan of collecting multiple techniques. Instead, when looking at a movement, he’s observing the relationship between the concepts of weight distribution, base, momentum, timing, and proximity.

“If you can understand why a movement is what it is, then you’ll be able to see that in any technique. If you look at all movements through that lens, then you’ll see that they’re all essentially the same. It’s just a matter of manipulating those concept variables.”

2. Take responsibility for yourself

Physical autonomy. Autoregulation*. Responsibility. Much of the work of GMB appears to have threaded through it a strong focus on helping clients take ownership of their bodies, their progress, and their achievements. It’s something that a young Ryan learnt under the tutelage of Mark Folger and it’s never left him.

*Autoregulation refers to the ability to monitor and adjust your workload and practice in response to the level of progress you’re currently reaching.

When Ryan was being coached by Folger, he never asked his coach how many times he should complete a particular exercise. Instead, he’d repeat the same exercise over and over, responding to the coach’s micro-adjustments.

“Don’t count reps,” Ryan recommends. “Focus on how many good, pretty reps you can do, and simply practice that movement until you’re tired or your form breaks down.”

4. There are no ‘bad’ movements

For Ryan and the team at GMB, intent is everything. Anyone who trains with GMB can expect to be asked to consider their ‘why’. Not only does your ‘why’ differ from that of another person, it will also change depending on the different stages and experiences in your life.

“For me, there is no such thing as a ‘bad’ movement–there are simply different goals. If a person labels a movement as ’wrong’ or incorrect’, let me say that I don’t agree. The way I look at it is this: is it safe for you and is it helping you to meet your goals? Or is it not?”

5. Exploration can only occur from a strong foundation

Ryan’s most interested in helping people develop strength, flexibility and motor control as a stable base from which to begin exploring movement. Yet many people neglect the basics, chasing any number of “shiny, sparkly movements” at the expense of building a solid foundation.

“When I suggest that someone work on (GMB movements such as) the A Frame, Bear, Monkey, Frogger or Crab, they say, ‘Oh, but I want to work on the handstand.’ And I say, ‘You are working on the handstand. A Frame is giving you better overhead pressing strength, better wrist strength, lumbar spine control.’ It gives them all of these things that they’ll need to support them when they actually get upside down.”

6. It will take as long as it takes

“When someone emails me at GMB and asks, ‘How long is it going to take me to get a planche or a handstand?’, I reply, ‘As long as it takes.’ That’s it.”

“If you’re working towards a skill, you’re going to fail hundreds and hundreds of times but that’s what it takes. One day you’re going to get it. Don’t worry how long it will take, just put in the work and you’ll get it.”

Check out this 20 minute joint mobility routine from GMB.

If you’re interested in more from Ryan Hurst and the team at GMB, be sure to check out their Best of 2021 wrap up. It includes links to their most downloaded, watched and read content on everything from full-body mobility to pain management and more.