The Language of Animal Flow

The origin and expansion of a global movement dialect 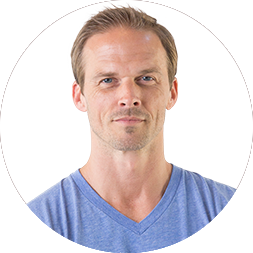 In the decade since Animal Flow was originally created, we’ve continued to streamline and improve the program in multiple ways. It’s our aim to always improve: from the way the movements are performed and the reasons behind doing so, to the ways in which we coach and communicate what we do and how we do it. Language, in particular, is one of the areas of the program that has undergone a significant amount of adjustment and refinement over time.

I always say that the names of the movements in AF are descriptive, not creative. When initially creating the program, I was coming from many years as a medical exercise specialist. In this field, most of the names are purely descriptive, using anatomical and osteokinematic terms (which are words that explain movements of bones such as ‘shoulder flexion’ or hip extension’). It made a lot of sense to me to name the AF movements in a similar way.

It also seemed logical that we use other words that almost anyone would be able to interpret or identify. For instance, most people would be able to recognize Animal Flow’s Ape position as a deep squat, or Beast to be some kind of on-all-fours (or ‘quadrupedal’) position. 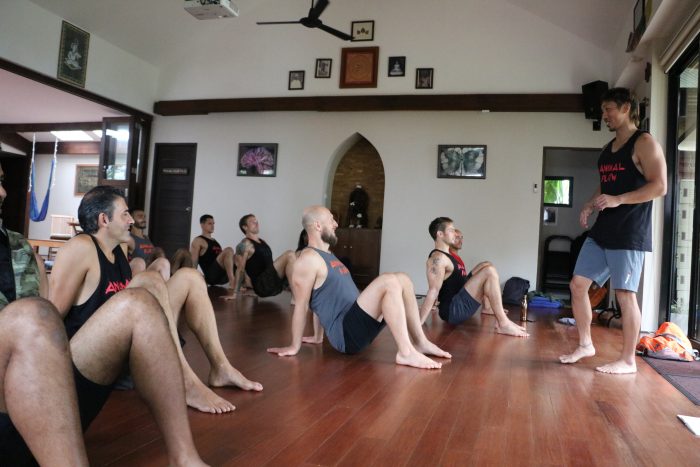 The primary naming convention we use takes those anatomical, osteokinematic, and easily-understood terms and combines them in this formula: Direction, Limb, Command.

Direction: right or left
Limb: arm or leg
Command: name of the movement

Our animal locomotion patterns, which are known collectively as ‘Traveling Forms’, follow a different formula. Movements that can travel laterally (sideways) always begin with the direction (right or left), the command, and then how many strides or repetitions should be completed.

Traveling Forms that move forwards or backwards either have the direction incorporated in their name already or only move in one direction. When these movements are called out, you might also hear an additional cue that tells you which hand or foot you’ll start with. Note that this is a bonus cue so if it’s not included it just means that you can start with whichever side you like.

There are a few exceptions to these rules, all of which become more clear in the L1, L2 and L3 workshops, and also in Animal Flow On Demand. Additionally, the creative side of AF means that we can sometimes find transitions between movements that defy the formulaic nature of the language. We call these ‘choreographed transitions’. Whenever we make a change to the orientation, direction or angle of a movement, or we otherwise modify the way we typically perform it (such as by making small, or ‘micro’, adjustments to hand or foot position), we would consider this a choreographed transition.

A global language for a global community

I also wanted a language that is 100% global meaning that anywhere you go in the world, you can communicate with other Flowists. This is the reason that the movements are spoken in their English names. English is not considered to be superior to other languages, it’s simply the language of the country of the program’s origin. There is a long history of movement disciplines sticking to the nomenclature of origin. Examples include a plié or jeté in ballet, and the enchulfa or cubanito in Cuban salsa dancing.

Following this not only allows us to articulate movements in a systemized way, it also allows our community to find ways to connect with each other in spite of the barriers that different languages can create. No matter where in the world you Flow, the formula is the same. Below you’ll find a few examples of ways that ‘Right leg Side Kickthrough’ is said in different regions of the world. We’ve asked some of our Regional Leaders to help us out. You’ll hear from: Denis Solomin from Russia, Blair Lee from Taiwan, Pey Ferrando from Argentina, Samantha Staal Petz from Austria, and Chao ‘K’ Zang from China.

The skill of language

Sure, the language can be challenging to learn at the start. But just like learning a new physical skill or a foreign language, you just have to practice it. How do you do that? Take a class, find an instructor, follow along with On Demand, and then just practice by saying it out loud and writing it down. As your access to the language opens up so, too, does the entire Animal Flow universe. It just takes a little time and focus.

If you’re new to the Animal Flow language, join Mike Fitch, program creator, in this beginner-level sample class. Mike takes you through a 30-minute class including Wrist Mobilizations and a simple Flow created using four Level 1 movements: Loaded Beast, Front Step Through, Underswitch, and Jumping Side Kickthrough. Learn the movements and the language of Animal Flow!